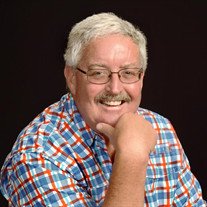 George Randall “Randy” Jones, age 59, born June 23, 1960, passed away peacefully and unexpectedly at his home in Tavares, Florida on November 3, 2019. Randy lived life to its fullest each day, even golfed, visited his family and watched Gator football on his last day. When he wasn’t visiting customers and running his business, he enjoyed playing golf with many of his friends on weekends, taking his wife on an adventure and even the simpler things in life as enjoying a picnic by the water and feeding the ducks. He was very active in his grandchildren’s lives. Randy always had an incredibly optimistic outlook that affected everyone. He loved the mornings, especially feeding his birds that would visit the many feeders in their yard.

Randy opened up his own successful embroidery business called “Unique Towels and Accessories.” He started out in his new business by calling on mostly golf courses and later expanded to all types of businesses, including many local schools and churches.


As a devoted Catholic, Randy attended Mass every week at Saint Charles Borromeo Catholic Church. He was a minister of hospitality. Randy was a member of Knights of Columbus Council 5150 and played a major role with the success of the golf tournament and christmas party.
Powered by

Create your own unique website with customizable templates.
KOC Council 5150